I've added and updated a number of records for a couple of my cousins' families.  My aunt Edna McLeod Broder is the granddaughter of Thomas Cooper and Sarah Rolston; I've added some details on their family.  I'd copied a lot of their vital records on my recent visit to the BC Archives, but of course, now that I'm home, I realize I missed a few.

I also found some vital records for members of the William James Manery family.
Posted by Faye at 11:51 PM No comments:

I've added a number of photos of people, places, and tombstones for some members of the Orson Hall family. Most of the changes relate to events in Dry Fork, Utah.  The Recent Updates list for October 8th and 9th will show you which records changed.
Posted by Faye at 8:58 PM No comments:

Email ThisBlogThis!Share to TwitterShare to FacebookShare to Pinterest
Labels: Hall 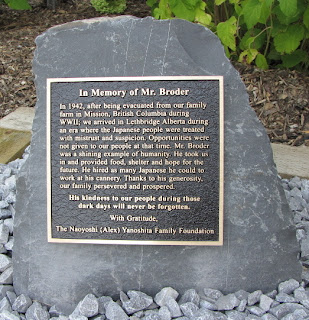 On 1 Sept 2012, a plaque was installed at the Nikka Yuko Japanese Garden in Lethbridge, AB in tribute to Robert Broder for his kindness to the Japanese internees during WWII.
Posted by Faye at 1:52 PM No comments:

Email ThisBlogThis!Share to TwitterShare to FacebookShare to Pinterest
Labels: Broder

Thanks to Elaine Willson, I now have the names of William James Manery's two youngest children.  They are Ettie May Manery and Frederick Sydney Manery. These are now included on both the Broder and the Striker parts of the site.
Posted by Faye at 3:33 PM No comments:

I did a bunch of updates to the Benjamin Gavin family today.  Benjamin married my great-grandaunt Edith Hamilton.  I added a photo that is believed to be of Edith about 1898 - if you recognize the photo and can confirm that it is or isn't Edith, please let me know.

I also added information about  Benjamin and Edith's children.
Posted by Faye at 10:48 PM No comments:

Judy Lindsay, my fifth cousin once removed, in Australia sent me some information on her line of descent from Sarah Jones.   Sarah's grandson, Anselm Frederick Goring was the first, and probably the only, member of the family to move to Australia.
Posted by Faye at 11:32 PM No comments:

I have finally made some progress in my search for my great-grandaunt Elizabeth Broder.   I have known for a long time that she spent some time in the United States, around 1880.  I knew that she married Robert Jones and that they lived in Wales.  And I knew that after Robert's death, sometime before 1943, she moved to Belfast where she died in 1951.

I didn't know when or where she and Robert married, where they lived in Wales, or anything about him.  Today I found them on the 1911 census of Wales.  They were living in Dolgelly, Merionethshire and they had been married for 6 years.

The census information led me, I think, to Robert's death - I've sent for the death certificate for confirmation.

Now to figure out WHERE they married.  I didn't find a record in Dolgelly.  The search continues.
Posted by Faye at 10:54 PM No comments:

Email ThisBlogThis!Share to TwitterShare to FacebookShare to Pinterest
Labels: Broder

My fourth cousin once removed, George Striker, died on 9 May 2012.  I have added some details for his family and a transcript and image of his obituary.

I've aded some details on the military career of Hubert Melville Colvig.  The details are sketchy and could lead to some interesting research - for example, he was court martialed (what for?) but apparently not convicted (he seems to have been re-assigned afterwards).  But he later claimed to have been dishonorably discharged. (Another court martial?)  So many questions . . . .
Posted by Faye at 5:18 PM No comments:

My first cousin once removed, Robert Gordon Manery (aka Uncle Gordon), died on 31 May 2012 at the age of 92.  I have updated his page and added the obittuary that appeared in the Lethbridge Herald.
Posted by Faye at 4:56 PM No comments:

Email ThisBlogThis!Share to TwitterShare to FacebookShare to Pinterest
Labels: Manery

Many (many, many) changes & additions to the Doyle site

Over the past month or so I've received a lot of information from cousins of various degrees.  It's kept me busy doing updates and additions and doing online lookups.  Much of what I received is now online.  (Finally, some might say.)

Mary Carroll sent me copies of two wonderful photos: John and Lydia (Nolan) Burns, and Jane Burns, their daughter, who became Sister Helen of the Cross.  Mary had received the photos from Jerry Moore who then provided me with a large selection of photos and a great deal of information on the descendants of John K Hamilton.

RJ Svitak photographed the tombstone of John G Hamilton and his wife Selma C Oksendahl and posted it on findagrave.com for me.  It's now attached to John's and Selma's records.

Charlotte (Watson) Grimshaw sent news of a new daughter and of Edmund Grimshaw's marriage and baby.

I've also made changes to Regans, Jordans, and Dunns.

As always, check the Recent Updates page for a list of all changes since the last upload on 16 April 2012.
Posted by Faye at 1:19 AM No comments:

Jerry Sherard sent me an item from the BC Minister of Mines Annual Report for 1949 that briefly describes the mining accident that killed Alan Scott Drummond.  I've added the information to Alan's page on the Jones portion of the site.
Posted by Faye at 3:41 PM No comments:

I've made a number of additions to the Stiker portion of the site.  These are mostly in the Venable and Bouker families.  I was recently contacted by a "new" third cousin, David Bouker, who has provided some information on his family. (Thanks Dave!)   The records that have been changed or added are listed on the Recent Updates page.

New Feature: You'll see a new Search item on the menu bar of all pages. This will allow you to search for names, dates, places, etc. It's a very fast way to get directly to the page you're interested in. (Click here to go directly to this new page.)
Posted by Faye at 2:37 PM No comments:

The Jones portion of the website was last published on 9 Oct 2011.  Since that time there have only been minor changes.  You can see the records that have changed on the Recent Updates page.

New Feature: You'll see a new Search item on the menu bar of all pages. This will allow you to search for names, dates, places, etc. It's a very fast way to get directly to the page you're interested in. (Click here to go directly to this new page.)

I've updated the Broder portion of the site.  The major changes are the addition of my new grand-niece Aubrie Elizabeth Doyle and the death of my 1st cousin twice removed Etta Williams (Mary Margaret Coulter).  There have been a number of other minor changes since the last publication on 16 Jan 2012.  You can see a list of the changed records on the Recent Updates page.

New Feature: The Search feature has been added to the Broder portion of the site.  Just click the Search item on the menu bar of any page to search for names, dates, places, etc. It's a very fast way to get directly to the page you're interested in. (Click here to go directly to this new page.)

Doyle updates and a new feature

I have a new grand-niece!  Aubie Elizabeth Doyle was born last week.  So of coursse I had to update the site.  (Only the Doyle section so far, although she's a member of most other family sections too.)

This update also picked up some changes I've made over the past month.  I'm still working my way through the Ontario parish registers, another dozen or so have been added.   I've also added a few photos and made some minor corrections.  See the Recent Updates page for a list of records that have changed since the last publicaton (March 14).

New Feature:  You'll see a new Search item on the menu bar of all pages.  This will allow you to search for names, dates, places, etc.  It's a very fast way to get directly to the page you're interested in.    (Click here to go directly to this new page.)

Search is only available on the Doyle portion of the website right now.  It will be added to all other sections as they are re-published.
Posted by Faye at 7:42 PM No comments:

Marty McGeein sent me a treasure-trove of photos of family members, mostly McGeeins and Doyles in Toledo,Ohio.  I've added about 25 of them to the website.

Prior to that, I'd been working on parish registers from Ontario.  familysearch.org recently put a lot of Ontario Catholic parish registers online.  They're not indexed, so I read through the registers of all the churches I knew family members had attended.  That yielded about 150 clippings which I'd been slowly working my way through - adding the data and the images to the appropriate records.  I'm nowhere near through with those, but the ones that I had done are now online too.

All-in-all, since the last time I published, about 60 people have been changed - some of them have a lot of new information, some have very little.  You can see a list of people who have changes on the Recent Updates page.
Posted by Faye at 12:13 AM No comments:

I have another new cousin

A couple of weeks ago I was contacted by Carolyn (Kirk) Jones who is my 4th cousin.  She has shared a lot of information on Chester Royal Kirk's family.  All of it, including some photos, has been added to the Striker portion of my site.
Posted by Faye at 8:54 PM No comments:

I got a note yesterday from Elaine Willson advising me that her parents, Ron King and Helen (Manery) King had both died recently.  That information has been added to the Broder and Striker lines.
Posted by Faye at 5:06 PM No comments: