Jordynn Piper Kish was born on Friday.  She has been added to each of the lines.
Posted by Faye at 6:26 PM No comments:

Little changes on various lines today as I fooled around with photos: 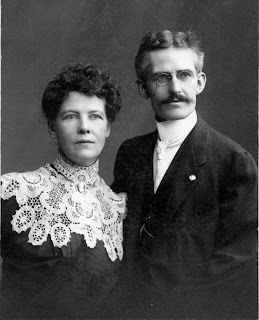 I've been doing more reading in newspaper archives.  It's amazing what made the "news" a hundred years ago.  I found a report of John Broder's 1906 purchase of the NookSack Valley Canning Co in Bellingham, WA. I'd never even heard of this one before.  There was also a longer story about its operation in 1910.  On the subject of canneries, I found a notice of incorporation for the Mt Vernon Canning Co by Robert & Violet Broder.

I also found a birth announcement for Roswell Herbert Graves, obituaries for Alice (Graves) Broder and Percy Broder, and a notice of divorce for Percy and Hannah (Baierle) Broder.

Most of these additions are included in both the Loyalists and Patriots  section and the Broder section.
Posted by Faye at 1:29 PM No comments:

I've done lots of work on the John Regan family in the last week or so.  I located cemetery records for Wilred Regan, James Leo Regan, and Margaret Jane (Regan) Brady in St Columbanus Cemetery, Elgin, ON.  These provided additional dates as well as spouses for James and Margaret

A "challenge"  has been Margaret's second husband Philip Brady. He didn't die until 1937 according to his cemetery record, but I can't find him on any census records.  In 1911, Margaret is on the census of South Crosby twp, listed as Head of Household and her father is living with her.  No sign of Philip.  I haven't found Margaret on the 1891 or 1901 censuses either.   It's all very strange.

There are lots of new documents too - birth, marriage & death registrations as well as census records.

And finally, thanks to Maureen Kirincic for a picture of Bridget (Regan) Murphy.

More to come on the Regans.
Posted by Faye at 12:48 AM No comments: